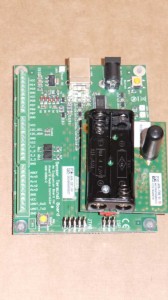 ATMEGA256RFR2 with Breakout Board

The Thinking Thermostat project is well advanced and is actually in production now (www.thinking-thermostats.com). However, like all good tekkies*, I know that a project is never really finished…if you want a good example, think Microsoft and Apple! The TT is based on the Atmel ATMEGA1284 microcontroller with around 100K of code already and rising. The code limit is 128K, so I may soon run out of space for development.

However, the Mark II is well and truly on the CAD package at the moment and the code barrier may evaporate. During a meeting with an Atmel rep and a couple of guys from Arrow Electronics, it was casually mentioned that Atmel maunfacture a version of the ATMEGA range which includes the ATMEGA256RFR2 which has twice as much code, RAM and FLASH space as the 1284, giving the project room to breath once more. 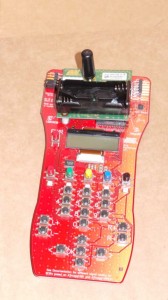 The best bit though is the incorporation onto the chip of a full RF interface which requires only three external components (a couple of capacitors and a small RF filter). It’s apparently fully supported by Atmel libraries whereby you can implement all sorts of industry standard communications networks on 2.4GHz. The acid test for me will come if I can integrate my Arduino code with the chip – I wrote all of the code for the Thinking Thermostat using the Arduino Integrated Development Environment (IDE). 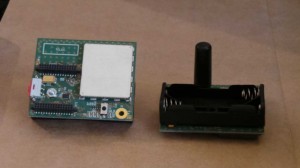 The Atmel Rep, Aloke, very kindly sent me $350 of development kit for free, so one of this weekends tasks is to get it up and running. There are 2 PCBs with the 256RFR2 chips, each with a small aerial and a couple of AAA batteries. Plus there’s a breakout board which brings out all of the chips digital signals so that you can play. In addition, they give you another board with a keyboard, alphanumeric LCD and some LEDs to tinker with – a hobbyists paradise!

*That’s tekkies not trekkies, although that probably does apply to The Omega Man as well