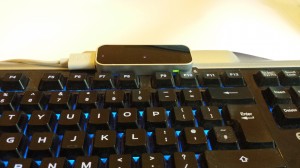 The Leap Motion On My Keyboard

Well, last year, I sponsored (pre-ordered!) the crowd-funded gadget known as the Leap Motion and I got a production unit this week. The apps that it comes with are impressive, but pointless really. However, I’ve managed to get it working with Google Earth.

If you’ve seen Man Of Steel, then you more-or-less know what it’s like to fly. Well, Google Earth with the Leap Motion is just like that.

It sits on top of your keyboard and ‘sees’ your hands allowing you to direct operations on your PC rather lilke Tom Cruise in The Minority Report. So far, I’m finding it a bit too sensitive, but I’m sure that it can be adjusted. 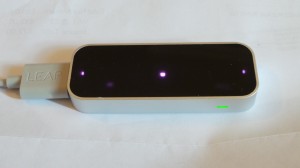 There’s an app called TOUCHLESS which allows you to interact with the Windows desktop. I’m not 100% how useful this is going to be, but we’ll see. It’s certainly an impressive use of technology though.

The interaction is a bit lacking in finesse and it also means that you have to keep your hand up in the air over the controller which can get a bit tiring. I can see that it might be useful to click option buttons so long as the buttons are fairly large.

One major drawback so far is that it won’t use multiple monitors, which is a bit if a bugger as I work on 2 monitors all the time.