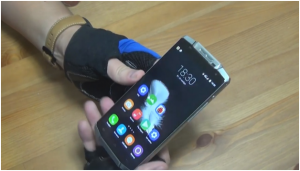 Sits nicely in the hand

For the past year, I’ve been using a great phone called the Zopo ZP999 which has a higher specification than the iPhone 6 and is simply a great piece of technology. However, it’s like the old Russian joke about the guy with the amazingly slim, multi-function digital watch that needs a suitcase to carry the battery. The Zopo has difficulty getting through the day without a charge. Hence, I’ve taken to carrying a little solar powered USB charger (I’ll review that later). This is a real pain though.

Anyway, I’ve had a thorough review of what I actually need out of my portable tech and I’ve come to the conclusion that so long as there’s a decent processor and enough memory so that the general usage is fairly slick, then what I really need is decent battery life.

So, I’ve ditched my Samsung tablet (after ditching my iPad) and bought a Lenovo Yoga 2 which has an 18 hour battery life – that translates to 4 or 5 days of general usage between charges, or reading all of the weekend papers if you get the chance.

Next in line for the chop was the faithful old Zopo. I have now acquired a Oukitel K10000 … no, me neither! Who on earth are Oukitel? Apparently it stands for “U and I for OK life” or some other ridiculous Chinglish aphorism. On the other hand, I got the K10000 5 days ago and after pretty heavy usage it’s still showing 80% battery life, so maybe it is an OK (battery) life!

K10000 indicates that the battery has a 10000mAH capacity. Contrast that with the 1810mAH that is in the iPhone 6 and you can get an idea of what this little gem is capable of doing.

It stands on it’s own reinforced feet as a phone – it’s heavy – with an HD display of 1280 x 720, which isn’t startling, but then the Zopo had more than double that  and I can’t actually tell much difference in a 5.5 inch display. Maybe on a 40 inch TV it would be obvious. In a handheld device, contrast and brightness are far more useful. Can you read the screen in sunlight for example? Answer. Yes.

The processor is a quad core Mediatek MT6735P, so nothing to write home about, but perfectly adequate for day-to-day usage and not too power hungry. 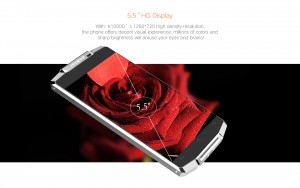 There are 2GB of RAM and 16GB of internal flash memory for your apps. Plus, there’s a slot for up to a 64GB micro SD card for movies or music. Additionally, it’s dual SIM which is handy for going abroad as you can buy a local pay as you go SIM and still keep your UK number for important calls from home, Unfortunately, you can’t run dual SIM and have an SD card as they use the second position in the SIM tray for the SD card, which is just a teensy bit daft in my opinion. Not a deal breaker, however.

So, here’s a really neat little trick. If you happen to keep in your pocket the included USB on-the-go cable, which is just a female charging cable, then you can plug somebody else’s phone into the K10000 and charge it! So, you’re out for the day hiking in the deep woods and your significant other has been whining at you for spending even more money on yet another useless phone gadget – even though you promised to sell the old one on Ebay, honest – and her (or his) phone battery dies. What do you do? Well, you save the day in good ‘ol Omega man style, whip out your OTG cable and charge their phone for them. In fact, when it dies once again you can do the same thing up to about three times in a row before you join the dead phone club yourself. Now that has got to earn brownie points.

So how robust is it? Hmmmm. Well, they claim that if you drop it on it’s back or an edge then it should survive a fall from 1.5m or thereabouts. However, if you happen to, e.g., leave it in your jacket pocket in the boot of a Tesla Model S when you’re looking for the charging cable and then lift your jacket up from the wrong end and fling your phone 20 feet across a car park so that it lands screen down on gravel then, perhaps not! The screen would still work and the phone would be usable after such a theoretical accident, but it would be just like looking through crazy paving. If such an awful occurrence actually occurs and you have to order another one which will arrive in a couple of days, then at least you would have a spare battery from the old one or you could let a pal have it to use as an Android development platform for some Internet Of Things experiment….to take a random example.

Plus, you’ll have also learned that you should have ordered the Gorilla glass screen cover and a nice, padded leather carrying case instead of believing the marketing hype about how robust it is.  So, a positive experience all round and not one that you’d need to share with anybody close to you, especially if you could intercept the credit card statement.

Still, at around £120, not a bad purchase. Not bad at all. If you get a £20/month SIM only phone contract instead of paying over £40 for an iPhone deal then you could easily get your money back in 6 months. Or 12 months if you smash it after two days of course.

As a final thought, this is not a light phone, but then big batteries are rarely sylph-like. One more use for the K10000 is in personal or home defence. Leave it by your bed and if you are burgled, stick the phone into a sock and use it as a cosh. I guarantee that it will dent the thickest of skulls. Not many phones come with a zombie defence mode built in.